As the population grows, the need for agricultural water also increases, gradually. As a result, in arid and semi-arid regions, attentions have led to the vital sources of groundwater. Drought crisis, the number of unauthorized wells, extraction of groundwater, low efficiency and productivity of water and irrigation without management have been led to fall of ground water and exacerbated water scarcity. Therefore, it is essential to create an optimal management structure in order to be able to handle the amount of water consumption in agriculture. The aim of this research is developing sustainable agriculture in the region, increasing water productivity and saving costs. Materials and Methods: before, the implementation of the program, more than 23 unauthorized and authorized wells were existed in 32 hectares of groves. But after implementation of the project, the number was reduced to two active wells and a reserve one. Here it is necessary to say that for about half of the wells in the gardens (19 wells) were unauthorized. All unauthorized wells were removed in the range of 32 hectares of gardens. Power distribution to the gardens, implementing of electrical equipment for three wells and equipping three wells with the electric pump are supposed as those that have been done. Then the irrigation system in 32 hectares was changed from the traditional to drip irrigation. A pool of 400 cubic meters was built for water storage. Pruning and trickery implemented at a level of 32 hectares. Besides, Organic fertilizer was prepared by using palm leaf scum and mulching at a level of 32 hectares.by creation of integrated water and land management, 64 small gardens were converted into a 32-hectare unit and managed and handled by a single unit. Due to the integration of all 32 hectares, the current costs such as labor costs reduced and divided between all horticulturalists .By implementing this plan, the amount of extraction of waters decrease gradually and on the other hand, harvesting increases. Generally, it can be said that water consumption will decrease, and agricultural production will increase. This represents an improvement in water productivity and is a major step towards establishing, sustainable agricultural development. By implementing a drip irrigation system, irrigation efficiency has increased by 85%, which has a great impact on reducing irrigation water consumption. Also, by removing terrestrial channels and transferring water through the pipe, the efficiency of transferring water increased more than 90%. The mentioned factors are considered as the solutions of optimal water consumption. Conclusions: The results of the evaluations showed that by implementation of this project, agricultural consumption and annual withdrawal of water from wells decreased to 57%. Also, the amount of agricultural production and harvest increased by 66%, which reflects the effects of integrated water management on improvement of water productivity.besides, it is supposed as a major step towards establishing a sustainable agricultural development. With an increase of 52% in fixed costs of the project, the annually variable cost is reduced by 90% and the annual revenue from sales of products is 3.88 times. Providing variable annual costs for poor farmers is very difficult, which by combination of wells and the integration of gardens,this was reduced to 90% and was mainly due to the reduction of labor costs in 64 small plots. Before the implementation of the project, for each 1/4 hectare of the garden, there was a well.but after the project, this amount is increased to 16 hectares. The average distance between the wells increased from 120 meters to 4000 meters. Therefore, none of the wells are not existed in each other's technical environment and can not negatively affect on each other. 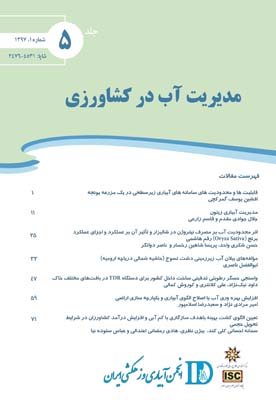